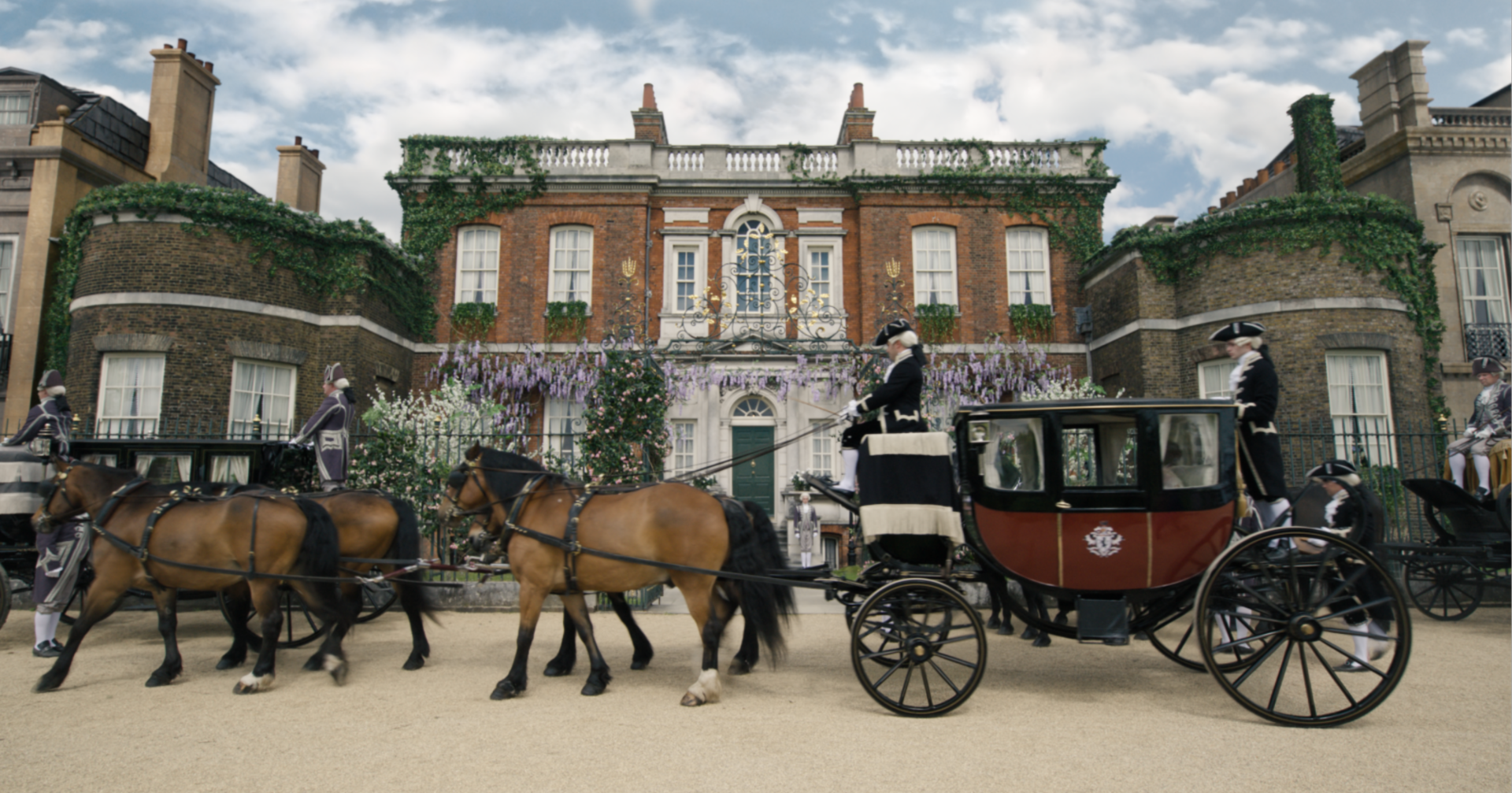 One of Us studio crafts dazzling VFX for Bridgerton S2

As per Julia Quinn’s bestselling novels, which deal with each of the eight Bridgerton siblings in turn, the second season of Shondaland’s Netflix series, Bridgerton, focuses on how Viscount Anthony Bridgerton (Jonathan Bailey) sets about selecting the best woman in town.

VFX Studio, One of Us, took part in this project as a continuation of the first instalment, working through pre-production, on-set and post production. The 250 VFX shots include complex creature work, alongside the familiar extravagant environments.

VFX Supervisor, Victor Tomi, was excited to be part of such a popular series again, where the historical visual effects blend seamlessly with the bold re-imagining of the genre. 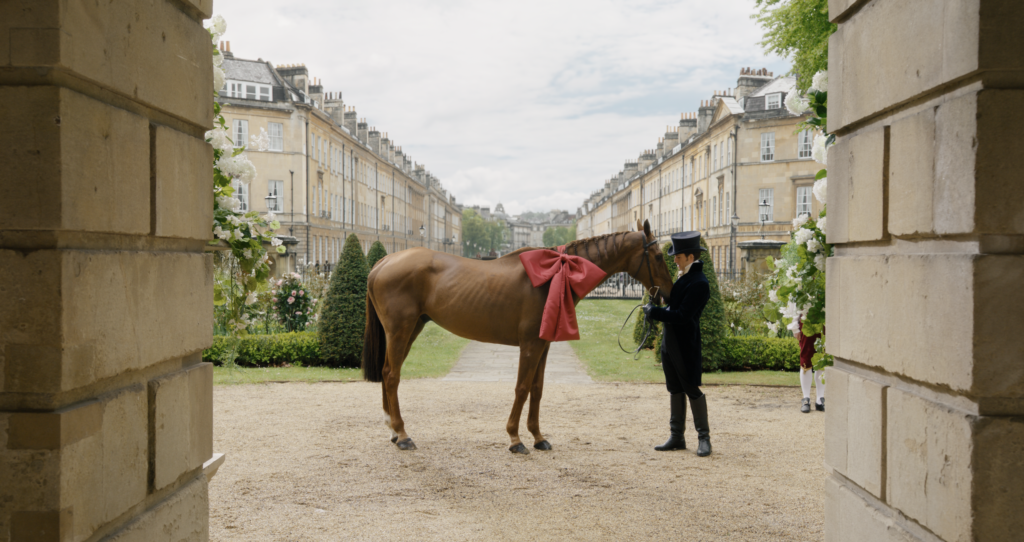 “ It’s a period drama – accurate to its age – but at the same time you can have fun with the visual effects, playing around and introducing a bit of a twist to it. “

The lavish backgrounds are a perfect example of it. “Some of these CG shots look like paintings,” continues Tomi It is the nature of the show and it’s great telling artists to be creative. It’s not like any other normal period drama, that’s what is really fun about Bridgerton.

CG Supervisor, Zach du Toit, explains that he was extremely proud of the close-ups and full CG garden set extensions, “It was a challenge to match the quality of all the beautiful images shot on set with the digital glam we recreated. There’s a lot of consideration in the garden design, with CG flowers and bushes planted right next to the real thing. But it worked immensely well.”

However the creatures were the most complex work One of Us did on the project. Working from pre-production, Ceylan Shevket, Head of Creatures, led the team who created a majestic stag, a peacock tail using a new feather system, and improved the asset of the familiar Bridgerton bee.

VFX Supervisor, Victor Tomi, reveals that the CG stag not only took the longest but it was also the sequence he was most proud of. “I have never done a creature sequence like that before. It was a challenge and a good opportunity to learn new skills, but it also plays a really important role in the story.”

One of Us also needed to build and replace a peacock’s tail, because the bird did not have its iconic plumage at the time of year they were shooting. “We did that through a new feather system, which allows us to make a fully customisable atlas of feathers, giving artists tools to easily create highly detailed feather grooms,” says Shevket. “Each feather is a unique piece of hi-res geometry, combining a polygonal tube for the stem and poly-curves for the barbs. In the case of Peacock this allowed us to accurately design the tail feather and have greater control of the subtle dynamics needed to bring it to life.”

Finally, the team also took the familiar bumble bee from season one, but this time there are some close up shots, which required an upgrade of detail in the wings, body, and groom.

This second season of Bridgerton also provided an opportunity to further develop the One of Us on-set app. 3D Generalist, Matthew Salisbury explains how the idea got started: “We wanted to explore how we could use the Unreal Engine on set. We imported season 1 assets into Unreal, and looked at how we might render them within the app. We eventually got to a point where we realised that we have this environment in Unreal, and it’s very easy to set up basic game controls, so you can fly around and explore in real time. We thought: ‘Wouldn’t that be useful if you were on set with the director and rather than looking at a green screen, you are looking at what you would end up looking at in the final shot?’”

Salisbury worked with Tomi building assets from season one, ready to be tested on set when season two started shooting. “At the time we weren’t sure how useful that would be,” continues Salisbury. “But as soon as Vic got his hands on it, he was like ‘OMG this is the tool we need!” Since then, more and more of our VFX supervisors have been using this app on set.

This app was especially useful for CG environments like the Bridgerton house – which took reference from two separate houses in Bath and Greenwich. “We were on set with the director and the DP, looking at a house and then all these green screens behind it,” explains Tomi. “They framed it with the camera and then we did the same in the app and we could   see how the final look was going to be.” It was extremely useful to realise that a slight camera move could actually reveal a better and more beautiful part of the building.

Apart from the houses, there was another very useful update for the CG stag scene. “We were shooting in the woods without a creature to frame up on,” says Tomi. “So having the CG stag on the app with the animations of each of his actions – this was a game-changer.” 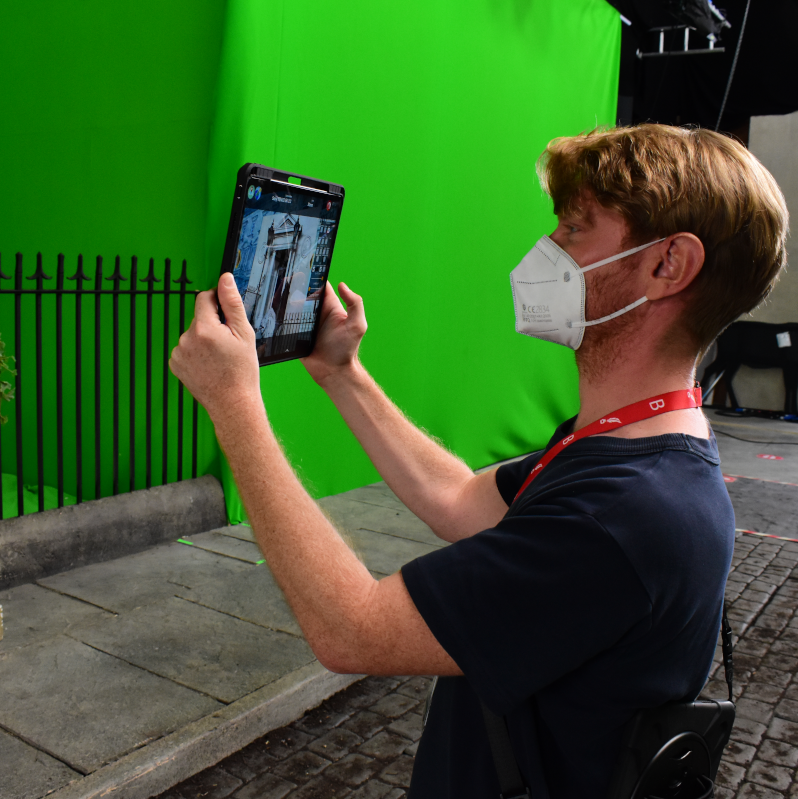